Acupressure is a type of bodywork that involves pressing specific points on the body with the fingers, knuckles, and palms (and sometimes the elbows and feet) to relieve pain, reduce stress, and promote general good health. Developed in China some 5,000 years ago, perhaps out of the natural human instinct to hold or rub a place on the body that hurts, acupressure is part of the holistic system of traditional chinese medicine (TCM) that also includes acupuncture. 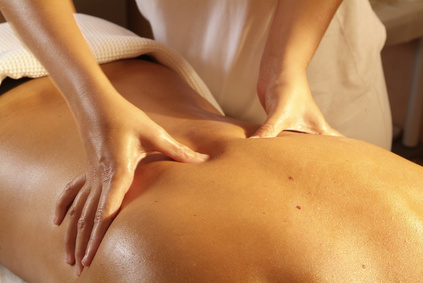 In the United States acupressure is primarily used to relieve pain, reduce stress, and improve overall well-being. In China, the technique is used more like first-aid: The Chinese typically practice it on themselves or on family members to treat everyday ailments such as colds, headaches, sore muscles, and hangovers. Specialists are consulted for more complicated problems.

While many people prefer to go to a trained therapist to get acupressure treatments, the techniques, once learned, can be performed on oneself or by a friend.

How Does Acupressure Work?

Traditional Chinese medicine views health as the constantly changing flow of vital energy, or qi (pronounced "chee") throughout the body. If that flow is hindered, sickness may develop. The goal of acupressure (and acupuncture) is to release blocked energy by stimulating specific points–called acupoints–along the body's 14 primary meridians, or energy channels. Pressing firmly and steadily on the proper acupoints, it is suggested, can promote energy flow to a part of the body that is experiencing disease or discomfort, enabling it to heal itself more readily. While acupuncture involves stimulation with needles, acupressure typically uses only the practitioner's hands to restore the balance of qi.

Although Western science has found no evidence that meridians actually exist in the body, studies do suggest that pressing on acupoints can release endorphins, the body's natural painkillers.

Many people have reported success using acupressure to relieve pain, reduce muscle tension, and promote relaxation. A number have found the therapy especially helpful for easing back pain and for certain types of headaches, including migraine. Post-operative pain and nausea has been found to respond to pressure point massage. Chronic sinusitis sufferers have also found it useful for easing congestion. Although research results are mixed, acupressure is also commonly used for morning sickness, motion sickness, and other types of nausea.

Some people find that treatments improve their overall vitality and well-being.

How To Choose a Practitioner

There is no licensing procedure for acupressure therapists. Because acupressure involves massage, it is important to find someone you feel comfortable with. A word-of-mouth recommendation from a friend or co-worker may be the best place to start. Having a short phone conversation with the therapist before you go in for a visit may help you find out if you at least like the person.

What Can I Expect From Acupressure?

During a treatment, which can last anywhere from 15 minutes to nearly an hour depending on the severity of the problem, an acupressure therapist may have you sit or lie on a massage table. Some acupressure therapists will work through clothing; others will ask you to undress (you will be covered with a towel).

The therapist will then locate and work on the specific acupoints that relate to your condition. Pressing a point behind your knee, for example, can help address low back pain. Or pressing a point on the top of the foot may help ease the pain of migraine.

Typically, the therapist will press each point for about three to ten seconds (longer in some cases). The points may be pressed and released repeatedly. If the problem doesn't respond after about 20 to 30 minutes of treatment, acupressure may not be effective for you on that particular day, or for that particular ailment.

After a treatment, you will probably feel looser and more relaxed. You may experience a slight achiness, but you shouldn't be in pain. Within three to eight visits, you should know whether the treatment is working for your ailment. Stress management usually requires a series of about six regular (weekly or monthly) treatments.

Even if you prefer to do acupressure on yourself, you may wish to see an acupressure practitioner for a visit or two first, particularly if you are addressing a chronic or complex medical problem. These visits can help you learn where the particular acupoints are on your body.