I received an email recently about how doctor's found great results in reducing a child's night time cough by rubbing Vicks Vapor Rub on their feet, then putting the kid's socks on, and letting them go to bed. Now this email stated that not only were they getting good results, but the Vicks technique was working 100% of the time. Hmmmmmm, Time to test

I have a young child and now that we are entering the cold season I figured I would have the opportunity to test this method out. Well, the doctors were right. One night I woke hearing my child coughing steadily in his sleep. Remembering the email that I received a few days earlier I decided to give the Vicks a shot. I went into his room and started applying the Vicks. Now, my child is a very sound sleeper and will sleep through anything, so me applying the Vicks to his feet did not even begin to stir him from his deep slumber. I tell you this because the results were amazing. After I applied the Vicks, but before the socks were even on I noticed that his coughing subsided and his breathing was deeper. I wanted to think that this was due to the fact that I had woken him up and he was simply not coughing 'at that moment'. That wasn't the case. He had literally stopped coughing all together.

I went to bed that night and was questioned by my child during breakfast on how the socks arrived on his feet in the middle of the night… he didn't even know.

The skeptic that I am was amazed, but still thought that it was just luck. Needless to say a couple nights later my child was coughing after a long Halloween night. Immediately I went for the Vicks Vapor Rub. Again, the coughing stopped upon application. I can't believe how well this works, but I wanted to share it with other parents out there knowing that a good night's sleep is like gold!

Vicks Vapor Rub has a baby version and we recommend using this one for infants and babies.

Same applies, apply to feet add socks! We also like to apply it to their chest in small amounts and under the nose. Using a humidifier helps too. 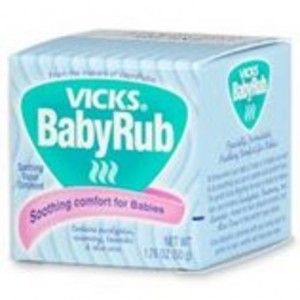 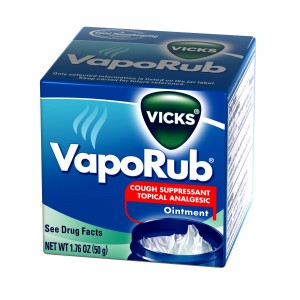